Update: Gold price is attempting a brief dip below the $1800 mark, as the US dollar’s rebound loses steam in the European session. So far this Monday, gold price has witnessed good two-way price action, initially having tested the $1810 barrier before retracing below $1800. At the time of writing, gold is trading at $1804, down 0.23% on the day. Renewed risk-aversion wave seems to have hit the market, which has downed the Treasury yields, underpinning the bounce in the non-yielding gold.

Gold traders now await the US CPI data and Fed Chair Jerome Powell’s testimony due Tuesday and Thursday respectively for fresh direction on gold prices. In the meantime, the dollar’s price action and the risk sentiment will continue to influence gold price.

DXY lost its footing at the highs of 92.541 to a low of 92.090 as risk appetite returned with the rally in US Treasuries running out of steam and global stock markets steadying.

Profit-taking ahead of key US inflation and retail sales data for June due next week was also said to have had an effect on the US dollar on Friday.

This has left the commodity complex on the bid for the open.

”The shifting focus of markets saw commodities endure a rollercoaster ride last week. However, they maintained a positive trajectory, with the ANZ China Commodity Index ending the week up 0.5%,” analysts at ANZ Bank said.

The CRB index has also added 1% recovering from a strong correction from the monthly highs.

This is leaving it in good stead to start the week bullish, supportive of the commodity-linked currencies such as AUD.

Meanwhile, the US dollar has been ruffled of late following the data that showed Americans filing new claims for unemployment benefits rose unexpectedly last week.

The data has indicated that the labour market recovery from the COVID-19 pandemic continues to be choppy.

At the same time, the European Central Bank has played a role in the dollar’s downside.

Last week, the ECB set a new inflation target on Thursday that pushed the euro higher, making for a less dollar bullish environment for the immediate future.

From here on, it will be whether the Minutes of the US Federal Reserve’s June policy meeting released on Wednesday that showed that the Fed members agreed they should be poised to act if inflation or other risks materialized dominates the sentient,

Eyes on US data

US data will be key in this regard this week as well.

‘We once again advise against extrapolating, consistent with Fed officials citing “transitory” factors, but another surge in used vehicle prices, along with reopening-related gains in airfares and hotel rates, likely led to another large rise in the CPI,” analysts at TD Securities said.

”In contrast, retail sales were probably close to flat; they have slowed since their stimulus-powered 11.3% m/m surge in March.”

This should continue to underpin the US dollar for the week ahead and deter bears from stepping in too early in case the data raises the inflation risk tone again.

Technically, gold has moved up to the 38.2% Fibonacci retracement of the mid-June drop.

The bulls continue to probe bear’s commitments there as follows:

The daily support structure between 1,782 and Friday’s lows that meet the 10-day EMA is so far holding up as well.

However, there could be a retest of the support first to draw in some extra demand for the push higher to the next structure. 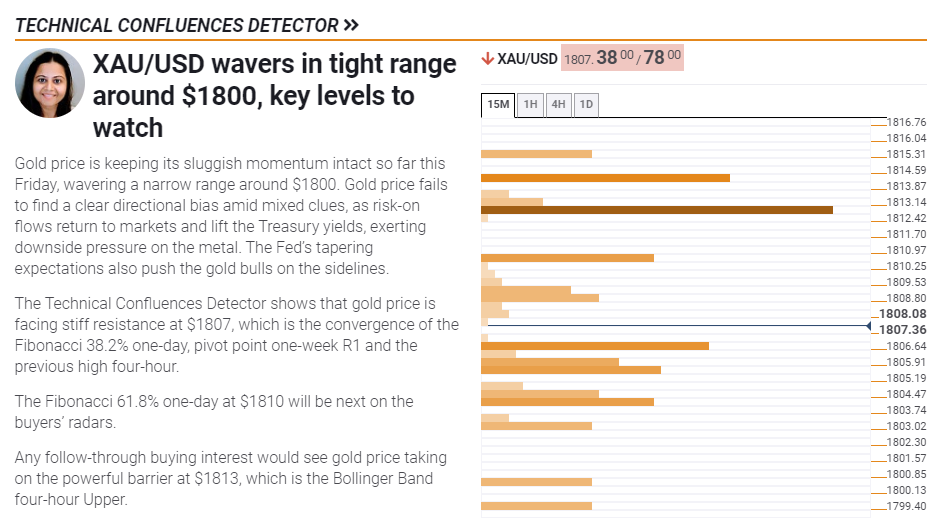 What is the Technical Confluences Detector?

The FXS Technical Confluences Detector is an in-house tool, developed by FXStreet experts, that allows you to identify those price levels where congestion of indicators like moving averages, Fibonacci levels, Pivot Points occurs. Knowing where these congestion points are located is very helpful as it allows the trader to see these areas of support and resistance easily.

Update: Gold rises above the $1,800 level extending the previous day’s gain on Monday, but failed to preserve the upside momentum. A rebound in US Treasury yields from the lower levels exerted pressure on the yellow metal. An uptick in the US 10-year benchmark bond yields underpins the demand for the US dollar. A higher USD valuation makes gold expensive for other currency holders. Meanwhile, the renewed concerns on the rising coronavirus cases due to the highly contagious Delta variant,  keep investors invested in the gold. Gold prices bounced on the back of its safe-haven appeal. The sentiments were further boosted as the US Federal Reserve’s meeting minutes in the previous week showed that substantial further progress on the economic recovery was not yet met, however,  progress is expected to continue.